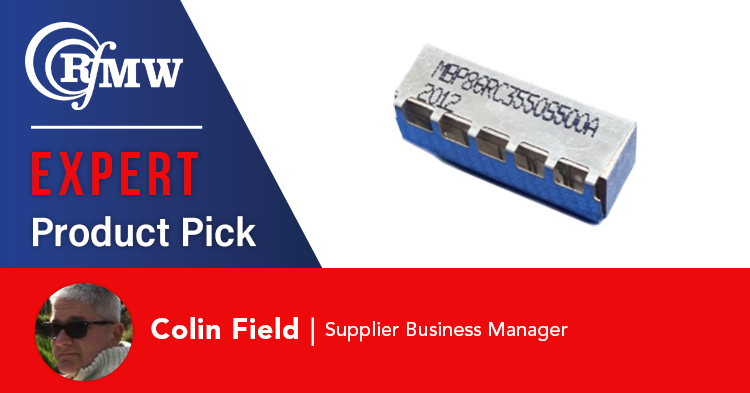 1. What made you select the Sangshin Elecom MBP86RC3550S500B? How does this product differentiate from others/what value does it offer?

The small form factor and high-power capabilities of Sangshin Elecom’s MBP86RC3550S500B make it an ideal component for global deployments of 5G gnodeBs.

The MBP86RC3550S500B is designed for peak-to-average power requirements of LTE signals, 3.5 GHz band, and is suitable as a roofing filter for global deployments of 5G gnodeB base stations. The Anatomy of a Test Cable

If you have spent any time using coaxial cable assemblies, you know that there is an endless multitude of options. There are many reasons why laboratory-grade cable assemblies and the cables used on a VNA are larger, more stable, and more reliable than a commodity RG-type cable. Developers should consider materials, temperature ranges, and mechanical design when selecting an ideal coaxial cable assembly.

While the materials and platings employed in cable assemblies are important, the dielectric of a cable assembly will be the most significant indication of performance. Designed to be the structural medium through which a signal travels, the dielectric is typically a light-weight polymer whose composition determines how efficiently a signal will propagate.

In seeking higher propagation velocity, a low-loss or low-attenuation cable assembly should include as much empty space as possible because electromagnetic waves travel fastest through a vacuum. However, a greater inclusion of air and micro-voids can inhibit the structural rigidity of a cable assembly. Electrical performance of a soft dielectric can become compromised when bent or flexed, or even when outer shields are added during manufacturing. In contrast, increasing rigidity for structural stability will also increase attenuation, decrease propagation velocity, and lengthen the mechanical phase.

The unifying principle in this scenario is density, which can be characterized in dielectrics by three factors:

Often overlooked or misunderstood, the third stage of defined dielectric density can severely impact a signal path in a highly sensitive and/or high-frequency system.

Unlike amorphous polymers whose molecule chains are randomly intertwined like a bowl of spaghetti–almost all polymers used as dielectrics are semicrystalline. Some of their long-chain molecules are bonded together in ordered, crystal-like folds and connected by the rest of the amorphous molecule chains. The crystalline portions provide mechanical strength and high heat resistance. The amorphous regions give dielectrics their flexibility and elasticity.

Semicrystalline polymers can have their electrical performance increased by lowering overall densities through foaming or sintering, however, they are all susceptible to the common performance threat of density variation. Changes in the density of these polymers can affect the dielectric constant enough that a phase-sensitive system will notice it. As signal frequencies increase, the effect will be amplified. Drift can be reduced by adding air to the dielectric, but it cannot eliminate the impact entirely.

Localized phase variation occurs if the dielectric’s density changes due to a bend in the cable. When solid materials are bent, stress compresses the material from the center to the inner diameter of the bend and strain elongates it from the center to the outer diameter. Stress and strain increases the local density of a dielectric enough so that the propagation is reduced and the mechanical phase length of the signal increases. If the radius of that bend is decreased even more, the mechanical phase and attenuation further increases due to the rise in local density.

One reason that coaxial cables have a minimum bend radius is to ensure that electrical performance is not diminished by local density changes. Another reason is that once a cable is bent beyond that minimum, the dielectric can be permanently deformed. This typically occurs when the outer shields and center conductor compress the material to the point that they cut or dent the dielectric. Cable assembly is rendered defective if the dielectric is cut or bent as the cable will permanently present a point of reflectance and amplitude distortions, along with a phase shift.

The integrity of the dielectric is maintained by armor. If standard coaxial cable assemblies are in protected enclosures or do not carry complex signals, they only require one to three shields to prevent RF leakage. Conversely, lab-grade and VNA cables require additional armor to maintain peak performance.

Lab-grade and VNA cable assembly armor is typically a combination of:

A coaxial cable lies beneath a cable’s armor. A standard coaxial cable is commonly constructed with a center conductor, a dielectric, two to three shields, and a polymer jacket. However, the dielectric in VNA cables is always a premium, high-velocity and low-density PTFE.

Armor is used to protect cable assemblies from potential damage, but also limits the bend radius of the base coaxial cable. Especially true of VNA cable assemblies, the numerous layers prevent the premium cable from being bent to the point where phase is noticeably impacted–long before the dielectric could be damaged. Additionally, the robust design of ruggedized ports and DUT connectors protects cable terminations from bending strain and ensures that the signal passing through the sensitive terminations retains integrity for repeatability.

If you would like to check out more information about the durability of test and VNA cable assemblies, browse RFMW’s portfolio of RF cable assemblies, or contact our Coaxial Components Product Manager, Dan Smoliga, at Dan.Smoliga@rfmw.com. 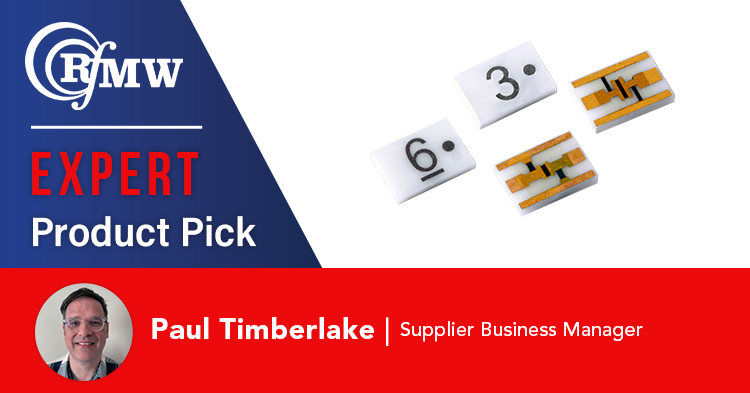 1. What made you select Smiths Interconnect TSX Series as a product to feature?

2. What are the key features and specifications of the TSX Series?

Available in 0604 package sizes with values from 1 – 10, 15, and 20 dB, the TSX Series enables excellent broadband RF performance to 50 GHz–meaning power handling is increased while reducing size.

3. What are the common markets and applications of the TSX Series?

NXP’s proprietary RF GaN technology is manufactured in their new Chandler (Arizona) fab and available through RFMW, their specialist RF distributor. This launch provides a GaN portfolio covering the 5G cellular bands between 2.3 and 4.0GHz.

A key benefit is that NXP’s GaN technology has a low-memory effect designed to maximizse linearity and reduce Digital Pre-Distortion (DPD) complexity.

Samples of the 5G Discrete Massive MIMO transistors are available now from RFMW’s sample program for both 32T32R and 64T64R antenna designs. Reference circuit evaluation boards are also available to order for the following frequency bands: 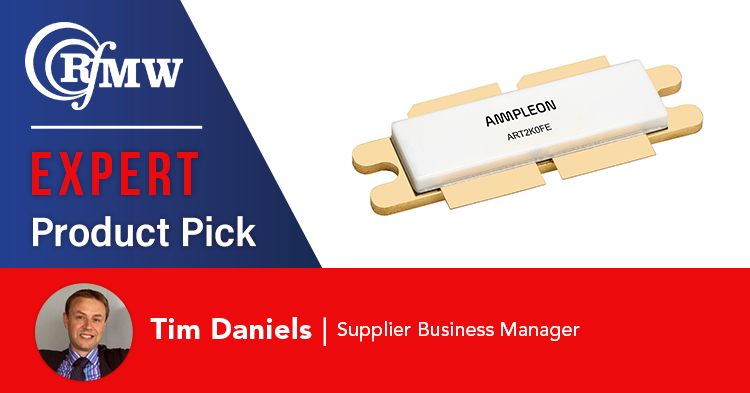 1. What made you select the Ampleon ART2K0 as a product to feature?

As the highest power, 2 Kilowatt flagship of Ampleon’s Advanced Rugged Technology series, the ART2K0 is ideal for many high-power industrial and broadcast designs for its ruggedness. These devices are the “Flux Capacitors” of the RF Power World!

2. What are the key features and specifications of the ART2K0?

Tested to 65:1 VSWR, Ampleon’s ART2K0 is suitable for rugged applications and can deliver up to 2KW of RF Power from HF to UHF.

3. What are the common markets and applications of the Ampleon ART2K0?