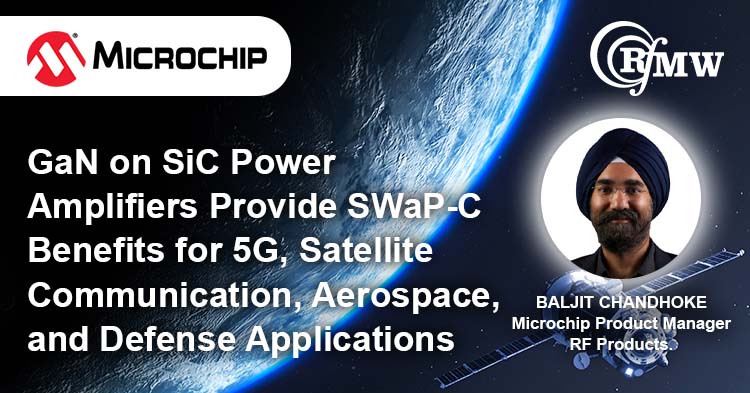 In Aerospace and Defense applications, different types of radar systems are used in aircrafts to monitor radar environments. Radar systems can alert pilots of any hostile or foreign activity using Active Electronically Scanned Array (AESA) Radars. AESA Radars utilize beams of radio waves that can be electronically steered to point in different directions without moving its antenna.

RF applications consistently seek SWaP-C or Size, Weight, Power, and Cost benefits. Large dish antennas (Figure A) are being replaced with phased array antennas (Figure B) for satellite communication that requires smaller size components for integration. Lower weight components are needed to have more payload for the satellite.

High RF Power is linear with high P1dB and IP3. It is used to reduce distortion and efficient with high PAE to minimize power consumption.

All these benefits in RF components are achieved at a low total operating cost, including manufacturing and components costs.

Power Amplifiers (PAs) play a key role at the transmitter in RF applications. One of the biggest PA requirements is that it can operate in its linear region to minimize RF distortion. However, this increases complexity, cost, size, and weight, since more gain stages are then required to offset the reduction in RF output power that can be delivered in this region. Even then, gain distortion can come into play. Also known as AM/AM and AM/PM distortion, it describes the output phase variation against input power and is often caused by a PA’s nonlinear capacitors. This occurs when the PA is operated near or even beyond its saturation point to maximize conversion efficiency and generate as much power as possible, which leads to device nonlinearities and a compression or peaking of the PA with input power. Compensation is required using techniques like digital predistortion.

Developers face another type of distortion with satellite communications systems that use higher-order modulation schemes. This includes 64/128/256 Quadrature Amplitude Modulation (QAM), which is extremely sensitive to non-linear behavior. Another challenge is achieving satisfactory peak-to-average power ratio (PAPR)—that is, the ratio of the highest power the PA will produce to its average power. PAPR determines how much data can be sent and is proportional to the average power. At the same time, though, the size of the PA needed for a given format depends on the peak power.

These and other conflicting challenges can only be met with Gallium Nitride (GaN) on Silicon Carbide (SiC) Power Amplifiers for satellite communication, 5G, and Aerospace & Defense applications.

ICP2637 has a wide bandwidth from 23–30 GHz and generates 5 watts CW output power and is offered in a QFN package as well as in die form.

These PAs have high gain and power added efficiency using GaN on SiC technology and meet the requirements at Ku/Ka band for 5G, Satellite Communication, and Aerospace & Defense applications. GaN on SiC with its highest power density provides the optimal power amplifier solutions for these applications.

RFMW is the premier pure play technical distributor of RF & Microwave semiconductors, connectors, and components for our customers and suppliers by providing component, value add, and design solutions through a focused technical sales and marketing organization.
Previous Story

The Anatomy of a Test Cable

RFMW Presents the Most Innovative Products of 2022